Theme Song: "You Raise Me Up" by Celtic Woman 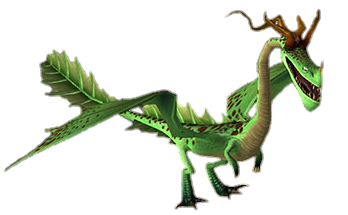 Favorite Activities: Sleeping, cuddling, and getting into other's business

Saddle: A leather saddle with saddle bags that prevents Vikings from feeling her cool skin while riding.

Appearance: General appearance of a Prickleboggle, green with brown spots and horns and a pale belly .He's considerably bigger than most Prickleboggles, though.

Personality: A calm, serene dragon, Yarrow is always cool under pressure and always keen on helping others, with more compassion than it seems possible to possess. He's extremely perceptive of others' emotions and can tell immediately when someone is hurt or bears ill-will. His focus on others, however, often means he's reckless when it comes to self-preservation, which has been known to get him into trouble. His nature focused on helping also means he's not skill at fighting and not apt at defending himself from harm

Flaws/Weaknesses: Reckless with his own safety, slow, not good at defending himself, not heat-tolerant

Worst Fear: Losing his friends because he failed them

Backstory: Pickle is the Windgnasher of Ylva Norling, Whisper's mother, and he is actually the one who first encounters Yarrow while the two of them are looking for Whisper. Yarrow had been captured by Dragon Hunters, but the angry Pickle frees the Prickleboggle, with Ylva pitching in. In the process, however, Pickle was injured. Once they had escaped the Hunters, Yarrow healed Pickle's wounds, and the two have been inseparable ever since. Ylva names him for a plant she often uses in healing potions.

Bond Between Ylva and Yarrow: Yarrow shares a closer relationship with Ylva's main dragon Pickle more than anyone. The two have formed a symbiotic relationship where they help each other survive; Pickle defends Yarrow, and Yarrow heals Pickle. However, Yarrow still becomes very fond of Ylva in time, and sees the three of them as a "trio." He's so perceptive that he seems to read Ylva's mind and knows her every thought, every move. Yarrow would do anything for Ylva...even give his life.