Instrumental Theme: "A Window to the Past" by John Willaims 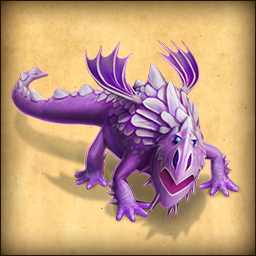 Appearance: General appearance of a Frozen Groncicle, purple and Gronckle-like with a more streamline body, a low-set head on a neck, a long tail, spikes on its chin, and plates down his back. He is, however, quite a bit bigger than most Frozen Groncicle, as he is centuries old, big and old enough to be deemed a Titan Wing. His eyes are blue, shining, and ancient.

Personality: Coldnip is an old and very wise dragon. It's not often known whether he has no temper or whether he's just too old and tired to act upon it, (though based on how powerful he is, Whisper thinks it's the latter). When met with anger, he calmly waits for the human/other dragon to calm down before approaching or continuing. He seems to have an almost uncanny ability to communicate with Whisper and is oddly fond of humans...for a wild dragon, that is. He often seems locked in some deep penetrating sorrow.

Backstory: Coldnip was a young dragon when the original Icestorm Island fell to invaders, the original Dragon Hunters, and his human was stolen from him and taken into slavery, along with many of his brethern. He wandered long and far before his sorrow got the better of him, and he settled into a glacier to sleep for a century. Whisper found him frozen in the same glacier as Icebones the Skrill. After being woken from his slumber, he smooths things out between Icebones and Winterwind after befriending Whisper. Whisper introduces him to Icevein's family, and Coldnip becomes an adopted member and respected elder in their family group. Until the King, Coldnip was respected as alpha among Whisper's dragons and Icevein's Groncicle family due to his wisdom. Even the King seems to have a certain respect for him. The old Frozen Groncicle acts as a father and grandfather figure to both Icebones and Icevein. In Icevein, he sees hope for the future of his kind; in Icebones, he seems to find a kindred spirit in someone who has lost everything. He also is very drawn to Whisper in a way she can't explain or understand. Winter is the season of reflection, and that is what Coldnip provides.